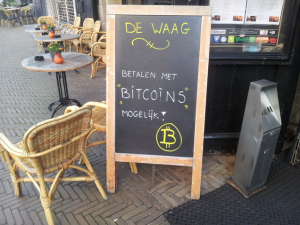 Sapan Shah started accepting the virtual currency Bitcoin at his Subway franchise in the Philadelphia suburb of Allentown in November. Almost immediately, people began trickling in from out of state just to experience the novelty of buying a sandwich with their digital coins. Andrew Torba and a friend drove 45 minutes. “During the ride we spoke about the potential Bitcoin had to completely revolutionize global commerce and finance, which only heightened the anticipation to make our first purchase,” he wrote in a blog post titled “I Bought Subway with Bitcoin and It Was Awesome.” Shah started getting attention on Reddit, then from local media. Two weeks after he started accepting Bitcoin, he was on CNBC. His story has also been featured by Yahoo, The Washington Post, CNN, and Entrepreneur magazine. It’s the Bitcoin bump. [Source]