Bittag is the brainchild of London-based hardware prototype designer Samuel Cox, BitTag attempts to solve this existing bitcoin pricing issue by automatically updating the price of bitcoin on its display using wireless technology.

Have a look at my latest project, BitTag. A #Bitcoin price tag for retail shops: http://t.co/KMoJ1FLxB8 – pic.twitter.com/49isVGYOqd

Merchants manage their BitTags through an accompanying iPad app. The app is used to set up the BitTags, and can process transactions when the device is placed against its screen, as shown below. 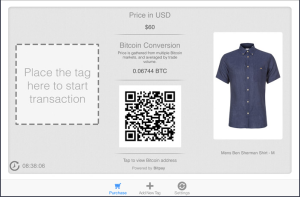