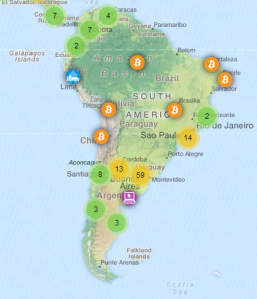 Adam Stradling, Founder at Coin4ce.com, which he describes as a Chile-based Bitcoin company supporting customers in Chile and Mexico, notes that while the Bitcoin ecosystem in Latin America is currently lagging behind the United States, he notes that “liquidity is a large piece of the ecosystem, and buying and trading Bitcoins is currently much harder to do in LatAm than in the USA.” Adam says that while there are now thousands of merchants accepting Bitcoins in the United States, there are only a few in Chile.

Tomas Alvarez, CEO of Coincove, opined to InsightSur that, “Bitcoin is thriving in the US due to its novelty factor (lots of willing early adopters), ideological factor (economic freedom, libertarianism, etc), and the investment culture (Wall Street) that heavily permeates this country.” He added that for Latin Americans, “the allure of Bitcoin mainly rests on its potential to protect us from governments that mismanage their economies (often resulting in currency debasement), a situation to which no Latin American is a stranger.”

It is clear that certain areas of Latin America have more incentive than others to adopt a decentralized and secure currency, due to instability and political meddling.