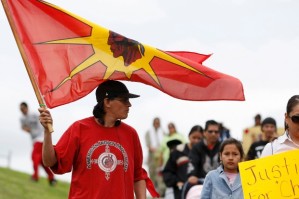 The residents of the Pine Ridge Indian Reservation don’t have a lot of dollars. This vast tract of land encompasses the whole of Shannon County, South Dakota, the second poorest county of the U.S., where residents can expect to earn just $7,887 per capita and, if they are men, live for just 48 years.

Now one resident of Pine Ridge wants to do away with the dollar altogether in the hope of building a better life for his community. Payu Harris, an unmarried 38-year-old father of one, is a web developer, digital currency trader and activist who can trace his ancestry back to the Northern Cheyenne, one of the tribes that defeated Custer at the Battle of the Little Bighorn. He is once again launching a war to free his people from the American government, only this time his weapon will be a cryptocurrency.

“I want the native people to embrace Bitcoin,” he told me over the phone. “We’re planning to use the reservations as a launching point for an cryptocurrency experiment. This is the nerd’s revenge. Bitcoin is a way of getting involved in big finance without being a Harvard grad or part of the Wall Street elite. Bitcoin opens the door for the common man to get involved.”